Section: Demons of The Jungle 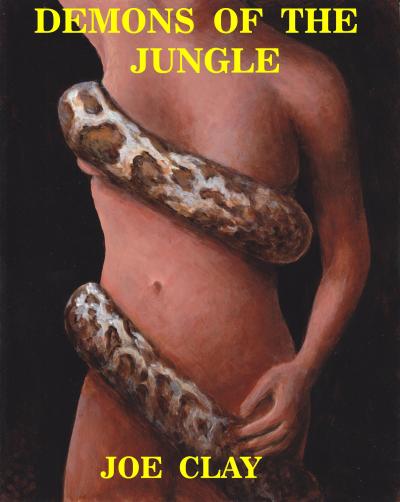 We are only weeks away from the release of Demons of the Jungle, Second Edition. This week’s blog will be a little different, giving you, the reader, an insight into the story before the final blog next week.

Every book needs to have an antagonist. Demons has several. The first two we will cover have names that are Latin and Greek. For more on how these names came about, check out blog three in this series, “Piecing it all together”.

We’ll start with the boss of the crew, Malum (ma·lum). Malum is the mastermind behind the scheme to rule the world by populating it with other demons that are under his control. Unsuspecting people in trouble wander into his realm, thinking they will be safe. Malum, however, through calculated events has lured them there to help with his devious plot.

Malum’s son, Asmodeus (/ˌæzməˈdiːəs/) – who is one of the seven the princes of Hell and the demon of lust – travels the world persuading and tempting those that fall for his charms. He has help on his travels: Clark and Jenny, non-demons who have chosen to drink the elixir and become immortal, and are also recruiters for Malum. Of course, others have already joined Malum in his quest before our two protagonists, Debra and Patricia, get there (click on their names to read the Bios for each). Paula and others are still in the jungle, while others have disappeared. Have those missing people served out their contracts and returned home, or was Malum behind their disappearance because they refused to join him?

In Demons the young ladies scramble to stay alive, but are they running from what is trying to save them? Will their plan work to beat Malum and get back to their world? Will the help Patricia foresaw show up in time? Who are they looking for and will their help be in human or spirit form? They have no idea, they don’t know who to trust and time is running out!

Excerpts from Demons of the Jungle

“Debra, minutes after they dropped you off, my clan snatched them from the car at a traffic light. They were beaten, tortured, and your mother raped again, all in my name, before being sacrificed to me,” Malum explained.

Debra stood there in shock with tears streaming down her face. She froze as she stood and listened, while Malum continued.

He chuckled as he went into the details about holding the bathroom door shut at the truck stop, which made Debra miss her ride out west. His plan would have been foiled if she had not been there when Trish arrived.

“Trish, like with Debra I had to make sure you stayed away from home. I couldn’t take a chance on you returning and not meeting Debra. I used the power of Mother Nature to destroy them as they slept. The superior being would not allow me to make them suffer,” Malum exclaimed.

Debra and Trish were now hugging each other, crying and trembling, but they found some comfort in each other’s arms. Trish could tell by Malum’s voice the pleasure he was getting from telling them the details of his executed plan. She didn’t want to interrupt as he continued.

His story moved on to Texas and how Trish was correct in her assumption about that night on the Texas stage. Damian and Luke were indeed the same person, and that’s how the flyers had got in their hands. Then he moved on to what they didn’t know. The actor playing Mr. Evil had written the script and made a deal with Malum in exchange for two virgins, beautiful, of course. He would use his play to bring people from the light and into the darkness.

“That’s why you two were in Texas,” Malum stated.

Both girls had stopped eating and were trying to keep their food down as the feature stopped rolling. Debra tried to rock her chair but to no avail. She looked at Trish and whispered, “I’m making a run for it.”

“Hang on, help will be here soon,” Trish replied.

Debra paid no attention as she fought to crawl out of the chair over the table, getting nowhere. The lights were turned back up.

“In front of you, ladies, are the cups. Drink and enjoy life with no fear and enjoy the palace, or suffer a grueling slow death,” Malum said.

“Why didn’t you give Mrs. Johnson the cup? She was willing,” Trish asked.

“Her soul was a good one, but his was the one I needed,” Malum barked.

Trish nodded her head as she turned to Debra. With tears pouring down her face, Debra shook her head.

“I don’t have your optimism. I don’t want to die that way. Something made Mrs. Johnson feel pure pleasure before her demise. She appeared to enjoy it. If that’s the spawning ritual, bearing their children is the lesser of the two evils for me. I’ll beg for a quick death for you if you choose not to drink,” Debra whispered.

Debra reached for the cup. Her hands were shaking as she brought it to her mouth. Before she could get the goblet to her lips, Trish held her other hand.

“No, hang on, I feel help is close,” Trish exclaimed.

Blogs in this series: “When is a second edition needed?”, “Birth of the Demons”, “Piecing it all together”, “Who is Debra Wright?”, “Who is Patricia Mitchell?”, “Who is Levi West”, and the teaser before the release, “A deal too good to be true”.

Leave a Reply to Demons of the Jungle – Getting Reacquainted. (WU/WIP 1-19) – Joseph Clay – Author Cancel reply

The Light is On