To Shred or Not to Shred

Hello again. This weeks blog could be in the Writing Updates/WIP category since it is dealing with a manuscript that should be heading across the big pond to the editor by the end of February or early March.

I decided that this category was a better place as it is more about how the manuscript was totally screwed up.

I have had this gem since August of last year.  I figure it’s about time Clare―my editor/proofreader and the owner of Human Voices Editorial Services―gets it back. I’ll start from the beginning and refresh everyone’s memory..

The characters in Demons of the Jungle and Witch’s Dilemma came from the first manuscript I wrote, West on the East – Noon Judgement. I won’t spend a lot of time telling you about how that book or the manuscript review went. To read all about that, visit ‘Numbers to Words: My Journey from Engineering to Writing’.

Last year, while Witch’s Dilemma was going through editing, proofreading, formatting and all that goes into the final stages of getting a book published, I went back and dug out West on the East – Noon Judgement from the file cabinet. The process of dividing it up into several shorter stories began. From there, I placed the stories into two different series, with the first series called ‘The New Era’, and the first book in that series titled Rise from the Ruins.

[Bloggers note #1 to new authors, a rule to remember: never list in the back matter of your book the title of your next release, unless it is already written, edited and waiting to be published. Keep reading and you will find out why.]

Rise from the Ruins, just shy of 143,000 words, was completed and sent to Clare for a manuscript review on August 8, 2016. I figured since I had already written two books, I had this down pat, and I could possibly release Rise from the Ruins in mid-December in time for Christmas.

While the manuscript was being reviewed, I was writing the blogs and preparing the book release/signing party, with the help of The Marketing Mill, for Witch’s Dilemma, never giving Rise from the Ruins a second thought. Like I said, I’ve written two books, what could go wrong?

Later in August, the 23rd to be exact, Clare sent the manuscript review back (yes, she is fast and thorough). I opened the email thinking I would make the changes needed by the middle of September and get it back to her for editing and proofreading, and then to the publisher by November 1 for the December release.

This is the first paragraph from that manuscript review:

“I really enjoyed Rise from the Ruins. There’s a good mix of the supernatural and the real (eg: mental health issues, a very human story about a man trying to fill the shoes of the people who came before him). I also thought there were lots of humorous moments and witty dialogue, which balanced nicely with the darker material.”

“Here are my suggestions.”

Sounds pretty good, right? Well, that’s about all the good there was in the four-page review. As a writer you know you are in trouble when there’s a Plot Graph Triangle on the first page. I have attached a scanned copy of it below. 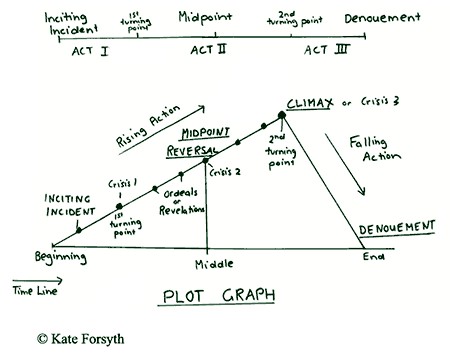 (During the edit of this blog, Clare informed me where the above chart came from. I ventured on over and read the post in its entirety. The blog is titled, ‘To plot, or not to plot – that is the question …’, written by Kate Forsyth.)

[Bloggers note #2 to new authors, a rule to remember: remember this graph; it comes in handy when writing and checking your plot structure. Plus, take a few minutes and go read Kate Forsyth’s post, after you finish reading this blog, of course.]

With Clare being the professional she is, in each section (Plot, Writing Style, Characters, Settings) she always started off with the good, and then proceeded to the bad and ugly. Below is another excerpt from her manuscript review that sums it all up.

“So, you are missing a Midpoint Reversal and satisfying Climax. Essentially you need a moment when all the mounting danger becomes inescapably real, and everything Levi holds dear (ie: the ranch and its people) are unquestionably in danger, when Levi could be about to lose everything. Then there needs to be a climactic scene in which Levi defeats the enemies who are pursuing him (ie: the people who are after Betsy’s will), or at least one of these enemies, who can then set him up to continue the hunt in the next book. I don’t know if you play video games, but it’s like defeating increasingly difficult ‘baddies’ on the way to the big boss – in a series, you need to defeat a baddie in each book to give the reader that all-important feeling of victory that keeps them hooked.

“I have some plot suggestions that could give you these important moments. Of course, these are only ideas and it is your book so you should tell the story you want to tell, but it might help you to see what I mean by showing you in the context of your story.”

There were more issues than the plot, so my first thought was to shred the whole project and begin writing something else altogether.

Since I had less than two months before the release of Witch’s Dilemma, I still had blogs to write and post, a party to plan and a manuscript to get to the publishers for printing. I decided that I could shred Rise from the Ruins later and filed the review with the manuscript.

Well, Witch’s Dilemma was released late October, and then before I knew it the holiday season was upon us and a new year had been rung in.

Three days into the new year, I began planning out my year. After deciding to write two short collections I pulled out the manuscript review of Rise from the Ruins. Once again it crossed my mind to rip it into shreds, toss it into the bottom of the file cabinet and swear rats chewed it up.

However, I trust Clare with my literary life, so I focused on the good and not the bad and decided it could be fixed, with a lot of work. Via email, Clare and I began discussing the changes; most of her suggestions I agreed with, but there were a couple I didn’t.

[Bloggers note #3 to new authors, a rule to remember: it is ok to disagree with your editor/proofreader as long as it is done in a professional manner and with respect. Trust me, they have forgotten more than you will ever know. Have a good reason why you don’t want to do it their way―you may want to make sure your idea is better than the one they are suggesting, so think about it first before putting your foot down.]

I thought we needed to add time to the front of the story; Clare didn’t like that idea as the beginning was in good shape and set the story up the way it should be. She suggested that a prologue may be the answer. I didn’t want to use a prologue as that breaks rule number #2 in Elmore Leonard’s 10 Rules of Writing, plus my timeline was laid out so one was not needed, I thought.

I continued to write on the other two projects while I pondered a way to fix this mess called Rise from the Ruins.

One day, during a break from the other two projects, I pulled down the two-inch red binder that is full of the notes, bios and history of the non-existent ranch in that story, and the family tree along with the timeline through which this land came to belong to the family.

Along with those notes I once again removed the bled-all-over West on the East – Noon Judgement manuscript and began reacquainting myself with the complete saga.

Remember, I pulled this from the beginning of a huge manuscript written well over four years ago.

[Bloggers note #4 to new authors, a rule to remember: keep all your notes on your work and keep them organized. This holds true for any story idea you have, but especially for a series. An outline that you thought you wouldn’t need may be what you need now.]

Once that was done I thought back to any issues I had when writing Rise from the Ruins.

One immediately jumped out at me: I had a hard time figuring out what scene should be used to end the first book. Choosing a wrong ending will make the middle and the beginning wrong also, or (as we see from the review excerpts from Clare) cause your editor to show you a plot graph. With all the research complete I saw the problems, and by the middle of January I had it figured out:

The fix: Clare was right. The beginning of Rise from the Ruins doesn’t need to be changed, but it’s not for this book. I was right in that I didn’t need a prologue, I needed a first book―which was already outlined in my notes but overlooked―that led up to the beginning of Rise from the Ruins, and that book needed to revolve around the main character that got all this started. The new title of the first book: Thunder Bear. The title for the second book, I think, will be… let’s just say I don’t have a clue and leave it at that.

[Bloggers note  #5 to new authors, a rule to remember: learn from your mistakes, as a mistake repeated more than once is a choice and could become a habit. Yes, I have a title in mind, but the story is nowhere close to being ready to be published.]

I really don’t know if I’ll ever use Rise from the Ruins as a title, as the way it’s laid out now it doesn’t seem to fit anymore.

a topsy-turvy life of quietude

SCENOVELA
The Light is On

Resources and Services for the Independent Author/Writer/Blogger. When You Succeed We Succeed!