Section: From the Author’s Desk 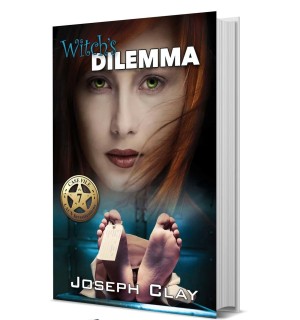 After five months of brisk sales of Witch’s Dilemma in Paperback, the time has come to release the eBook version. The eBook format will go on sale Friday March, 17 2017. You can pre-order your copy now on Amazon to get a step ahead of the game. Price $5.99.

“The devils you know are angels of mercy compared to the hell you are about to encounter.”

World-renowned paranormal psychiatrist and practicing witch Doctor Valerie Bell and her husband, computer genius and strip club-owner Adam Bell, have an unusual marriage, but when Adam goes missing and a mutilated body is found in his car, Valerie begins to fear for her safety. At first she uses her powers of witchcraft and her position as a profiler for the Fort Worth Police Department to help with the investigation, but when she receives a threatening ransom note from a madman she turns to a private investigator for help.

Levi West, mysterious, sharp-witted and sexy, has come to Texas to help two women, Debra and Patricia, who are in the care of the non-profit organization Basham House. The women have endured a terrible supernatural ordeal in the Congolese jungle, and Levi takes them to Valerie for psychiatric therapy. During their first appointment Valerie tells them about her husband’s disappearance and begs Levi for help. But with so many skeletons hiding in Valerie’s closet, how can he be sure that he can trust her?

With the clock ticking, Valerie faces a dangerous dilemma: come up with the ransom money or execute a risky plan to save her career and her reputation. Whatever she chooses, she must act quickly. Although she keeps the details of her past firmly locked away, unfolding events threaten to drop the key right into the hands of the wrong people, and Valerie only has one week in which to assemble an unstoppable team before somebody unlocks the door. Can she convince Levi to help her in time, or will her sordid past end up splashed across the six o’clock news?

As the investigation continues, connections are made between Adam’s disappearance and a series of brutal killings, the Salem Stake murders, which took place six years previously. The killer was never found, and the bodies of the thirteen victims were all discovered alone, in rooms locked from the inside. So when a message from the returned Salem Stake is found in Adam’s car, alongside the unidentifiable body, the police begin to wonder how he could be connected to the unsolved crimes.

Witch’s Dilemma is a novel filled with twists, turns and plenty of questions to keep you guessing. Will the mystery of Adam’s disappearance ever be solved? Who is behind the Salem Stake murders and is it too late to bring them to justice? And is there more to the police investigation than meets the eye? As loyalties change and sexual attractions burn sudden and fierce, every character learns the price that must be paid when confronting a life-changing dilemma.

Dive into Witch’s Dilemma for an explosive adventure packed with witchcraft, sex, betrayal and bloodthirsty vengeance.

The other blogs in the Witch’s Dilemma series: Texas Witching Hour – Valerie and Associates – Fort Worth Government – LACN Investigations – Rounding out the Cast – The Bell Witch Haunting – Some Things Can’t be Explained.